Why are iOmniscient products rated with an IQ number?

All humans have intelligence but we recognize that some are more intelligent than others in a number of dimensions. The IQ Rating system was designed to quantify this. An IQ of 100 is the average IQ of the entire population so by definition 50% of the population has an IQ of more than 100 and of course 50% has less.

Artificial Intelligence systems emulate human intelligence and as with humans some of them are smarter than others. iOmniscient has rated the IQ of its own products. While it does offer many relatively simple, “low IQ” products as do most of the market, its real speciality is to offer the very large number of highly sophisticated products which warrant a very high IQ, putting them in the Genius class.

The Smarter solutions can work in more complex environments such as in crowds; they can operate with far fewer false alarms and they require far less computing infrastructure.

As iOmniscient started this journey of multi-sensor analytics long before the term “Artificial Intelligence” became fashionable, many of its most advanced capabilities are covered by its 70+ international patents putting it in the unique position of being the only company that can offer some of these “Genius” solutions.

To help our users differentiate the more advanced capabilities from the basic ones, all iOmniscient products are rated with their IQ.

To understand the intelligence level of your AI systems talk to your Regional iOmniscient consultant. 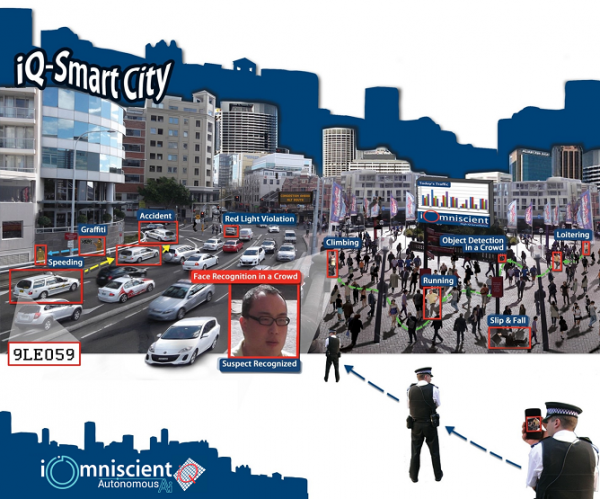 2018 ended well for iOmniscient with Wealth and Finance magazine naming the company as their Best Analytics Company of the Year. As many big players such as Microsoft and Google begin ... Read More

iOmniscient has been developing and deploying Artificial Intelligence Video Analytics Systems for almost two decades. The approaches involved were chosen because they were practical ... Read More

What are the strengths of different types of AI and where should they be used? There are many technologies available for Queue Management and the method deployed should depend … Read More

We are delighted to be announced as the Technology Leader in Artificial Intelligence in Australia by the APAC Insider magazine. They make their selections based on analyses and … Read More

In 2016 more customers chose iOmniscient around the world. The tally in 2016 is shown in the graph. In addition there were many smaller projects for retail, building management and general security. This has increased the ... Read More

The Baroda-Ahmedabad National Expressway in Gujerat, India, is 102.3 km. It used to take two and half hours to drive from one city to the other. Today, thanks to this highway, the journey can ... Read More

Conventional Systems are obsolete. Get in with the future.